StorageMart > Blog: Life Unboxed > News > StorageMart Suits up for NFL Debut as an Official Partner of the Kansas City Chiefs. 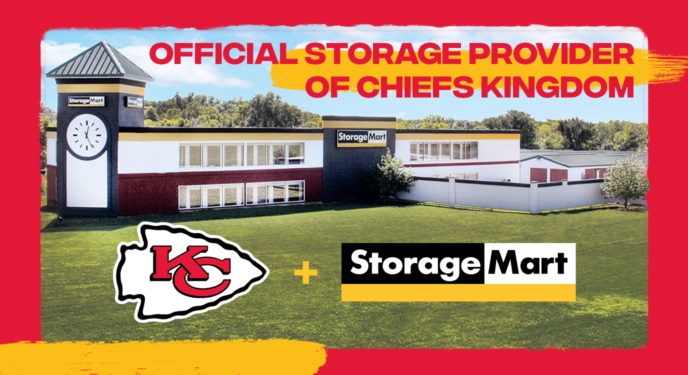 Today we are excited to announce our new partnership with the NFL’s Kansas City Chiefs. The five-year partnership between StorageMart and the Chiefs’ championship team will support the Big Brothers Big Sisters of America in their mission to find role models to mentor children in need of positive influences in their lives.

“A partnership with the Chiefs made a lot of sense geographically, but really, it’s our shared goal of supporting local communities that brought us together. The Chiefs do many great things to give back, and we’re thrilled to have partners aligned with our values as a global company,” Sarah Little, Managing Director of Digital Marketing for StorageMart.

Central to the arrangement is the StorageMart Tackle Tracker webpage, which will begin counting the Chiefs’ tackles at the start of the season. For every successful tackle, we’ll make a donation in support of the Big Brothers Big Sisters of America for a projected total of $50,000 for the 2021 season.

Tackle Tracker is an extension of our Store It Forward charitable giving program, which aims to improve the quality of life for people living near our locations and beyond. In recent years, we’ve donated more than half a million dollars to charities, in addition to donating storage space to charitable organizations throughout the US, UK, and Canada.

“StorageMart and the Chiefs are two local brands with deep midwestern roots and a shared mission to give back to our communities – not just here in Missouri – but across the United States and even the world,” Cris Burnam, StorageMart CEO.

About StorageMart: Dedicated to providing clean, well-lit storage units, and friendly customer service, StorageMart is the largest family operated self storage company in the world, and is led by the Burnam family, stalwarts of the industry for four generations. Through the “Store it Forward” charitable giving program, StorageMart gives back to the many communities it calls home.